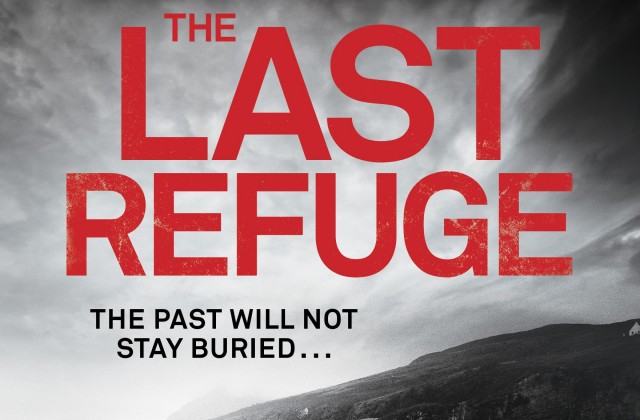 Stuff and some more stuff

There’s been a lot going on lately so I should really bring everything up to date, probably by starting at the beginning. The only problem with that is that I’m not entirely sure where the beginning is, except it’s probably somewhere near the start.

Anyway, The Last Refuge is out in paperback so that’s pretty darn exciting. The lovely people at Simon & Schuster have celebrated the fact by sticking up advertising posters just about everywhere there’s a choo-choo train. Sightings have come in from across central Scotland, the borders and northern England, with even a lesser-spotted poster been seen in warmer climes. If you see one, please give it a wave.

Over the summer, I was signing books and talking nonsense in various parts of the UK including but not limited to Bristol, Ayr, Kirkintilloch, London, Kirkcaldy, Glasgow, Tillicoultry, Harrogate, Callendar and Stirling. I can honestly say I enjoyed every one of them and thanks to all those who turned up to say hello.

In the middle of all that, I’ve also been writing a book. In fact, I’m still writing it. I sort of stopped and started again, then repeated that pattern so that I’m now on version three which is definitely (has to be) the final countdown to deadline day at the end of this month. After all the faffing, I’m happy that I’ve got it right and sometimes those agonies of just being plain wrong have to be gone through to get to the right place.

The book takes me back to Glasgow after my brief sojourn in the Faroe Islands, and reunites me with some long-lost friends in the shape of Rachel Narey, Tony Winter et al. Actually some of the et als might be in or not and some of the et als may die but that’s another story. Actually, it’s this story but never mind. I can’t tell you much more about it for now other than it involves murder and architecture and stuff.

What else? Well the third Bloody Scotland festival in my home city of Stirling passed off very successfully in September. Actually, you know what, there is so much to tell about it that I will do a separate blog on it. Anything to keep me from having to finish that book… But for now just let me say, Scotland 13 England 1.
In the coming couple of months I will be off on my travels, starting on Friday (October 10) when I’m off to Rome for the weekend to play for the Scotland Writers football team against our Italian counterparts. Assuming I survive that with both legs in working order then I’m off to Grantown-on-Spey for the Death in Grantown weekend festival which also features Lin Anderson, Alexandra Sokoloff, Russel McLean, Neil Broadfoot and many more.

Then in early November, I’m off to the US of A for a book fair in San Diego then Bouchercon in Long Beach, California where I’m on with a panel of fellow Scots – Catriona McPherson, James Oswald and Caro Ramsay. I’m home for one day then off to Reykjavik for Iceland Noir, again appearing with Mr Oswald but thankfully also with Louise Millar. November then finishes with a flurry of stuff, probably including snow, in Dalkeith, Glasgow and Glenrothes.